The adventures and conquests of a Missoula endurance athlete 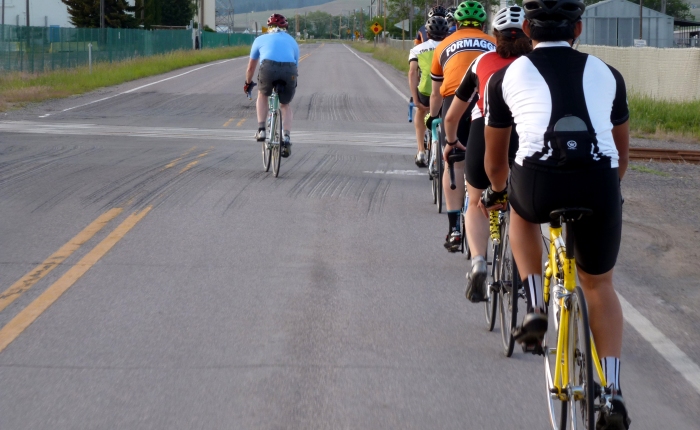 I, like many of you, love riding bikes. It is, in many ways, part of what defines me as a person. I ride mountain bikes, road bikes, triathlon bikes, cyclocross bikes. I like to race, testing my abilities against others and against myself. Sometimes I like to ride fast for no other reason than to feel the muscles in my legs getting perpetually closer to the breaking point. Sustaining effort becomes an ever more monumental task, and I reach for the superhuman feeling that comes from holding that effort as long as possible, before finally imploding to the point where putting any pressure at all on the pedals seems nearly impossible.

I also like to ride slow. I like to converse with my fellow riders, teach new riders the mechanics of riding in a pace line, look at the scenery and goof around. I like to zip through the woods at breakneck speed, I like to climb mountains on my bike, and I like to cover astounding amounts of ground on the open road, appreciating with every pedal stroke the brilliant engineering that allows me to do so under my own power.

As we are all reminded from time to time, though, this wonderful activity that we enjoy so much can turn against us pretty quickly, and always unexpectedly.

It was a gravel road, in a group of about 15 riders. There are a couple downhill corners where the group can really pick up speed, and we did just that. We flew around the first left-hand corner without incident, and banked into the second one, a right-hander with poor visibility. I was near the back, and on the left side (outside) of the group. Missing the smooth tire track on the far right, I got caught in the loose gravel nearer to the center of the road. Not wanting to slide out and take out other riders, I stayed wide, which is a great option if there are no cars coming the other direction. As it happened, though, this time there was an SUV with very poor timing headed up the road. My GPS track shows that I was going 32.9 miles per hour when I saw the car, at which point I quickly assessed my options. Swinging left would put me into a gully with a barbed wire fence, assuming I made it around the car to begin with, which would have been unlikely. Swinging right was out of the question, with the gravel and my current trajectory. I locked up the brakes and hoped for the best.

“The best” ended up being me having to tell the driver to back up after she got out of the car, so that I could un-wedge myself from under her bumper. Not entirely the outcome I had hoped for, but it could have been worse…

As it turned out, I suffered a substantial amount of road rash, some whiplash, a small pang in my right knee, a sore elbow and shoulder, and some dizziness upon standing. No broken bones, no lost memory. After laying low and not doing anything for three days, I was able to get out and get back to my life. All things considered, I am counting my lucky stars and trying to use the experience as a reminder in the future. I will, however, be off the bike for a couple weeks. I am also unable to run or swim, so the extent of my daily exercise at the moment is walking to and from work. I’m taking the opportunity to slow down, smell the lilacs, watch the birds flitting around on the riverbank on my way through town. Also I’ve been doing some reading, and sitting on the front porch a lot more than I usually do.

Sometimes that slowing down is necessary, and I usually don’t do it without being forced to. Occasionally, I can get carried away, just trying to keep up, and lose the clarity that comes with going a little slower. And maybe, just maybe, an SUV comes around the corner and puts me in my place.

With much reluctance, I’m skipping my next planned race, the Troika long course triathlon in Spokane on May 21st. By the time June rolls around, though, I should be ready to get back after it.

Until next time, stay safe out there.